If you’re going to install one outdoor security camera at your home, a floodlight camera is the best option. You get lights and a camera in one unit to capture all the action and you don’t have to mess with charging batteries or drilling holes through your walls for power cables — a floodlight cam can go wherever you have existing outdoor lighting. It’s a win-win smart home device. The only downsides are a high upfront price and a more involved installation.

Unfortunately, the new Google Nest Cam with floodlight ($280) doesn’t solve either of these issues, being one of the more expensive floodlight cams and having the oddest design and installation process. But, despite these failings, it’s an excellent floodlight camera and has several benefits over the competition — which is multiplying.

These benefits include a built-in battery backup for if the power goes out, intelligent motion sensing so the floodlights aren’t always going off when a moth flies by, and on-device processing that translates to much speedier alerts — crucial for a security camera. 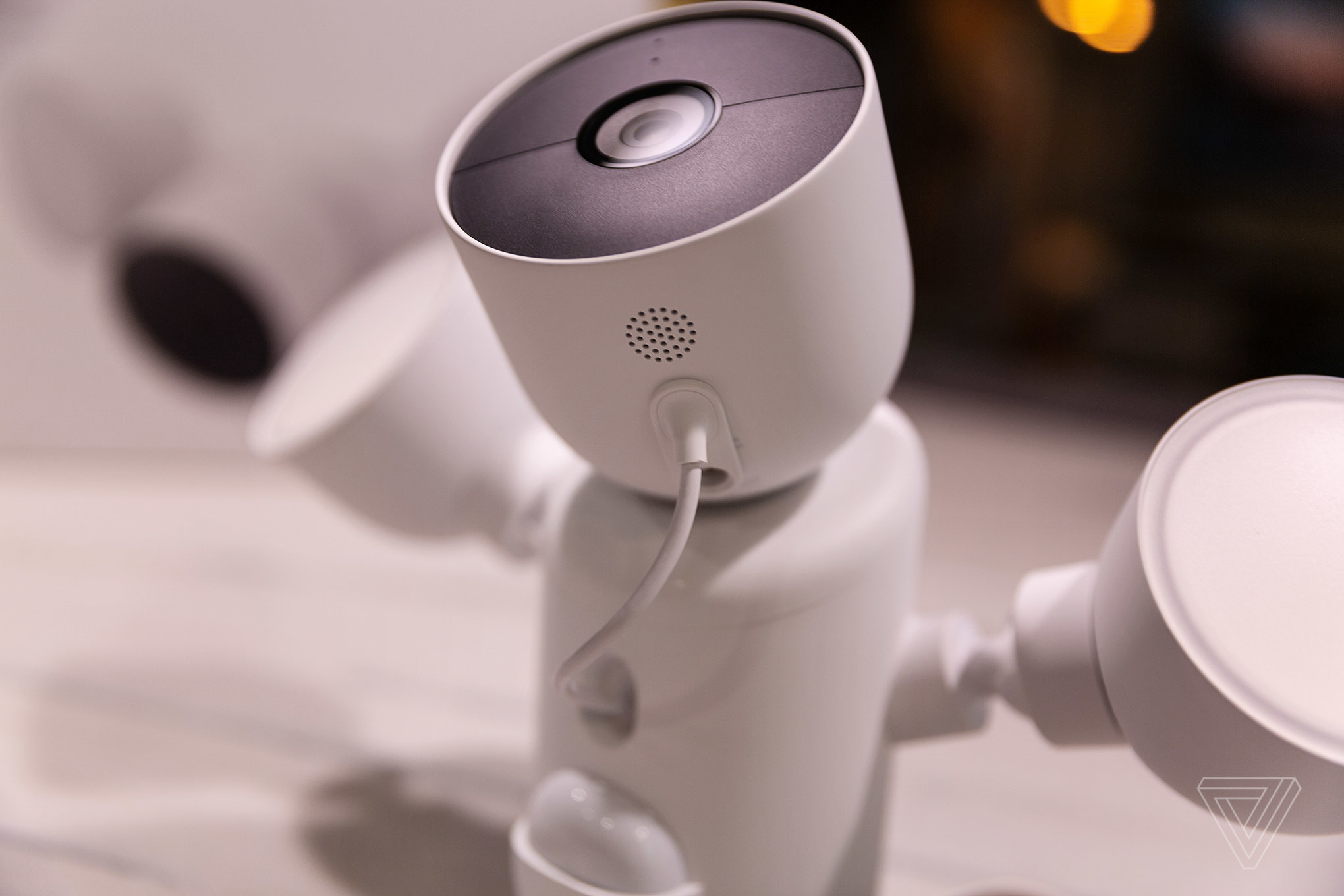 It can also record up to three hours of event-based video clips for free and has free smart alerts for motion, people, vehicles, and animals.

A siren is the one missing feature on the Nest Cam

The specs are comparable to the competition, although it’s the narrowest field of view by 10 degrees. Ring offers 140 degrees in its Floodlight Cam Plus ($180), and Eufy’s $300 option has a 360-degree rotating camera and 2K video, which is the same resolution Arlo offers in its battery Flood Cam Pro 3 ($250) that can be powered with an AC adaptor. The new Wyze Floodlight Cam has the option of two cameras, so you can survey two angles over 130 degrees each.

A siren is the one missing feature on the Nest Cam that’s found on all the competition. If you pay for Nest Aware, you do get the option to call 911 directly from the app, but the lack of a loud alarm to scare off a potential intruder is a big omission here. Additionally, both Eufy and Wyze have the option of onboard storage, so you don’t need to pay for a cloud subscription to view recorded video.

With the Google Nest Cam, a Nest Aware subscription (starting at $6 a month) is essential if you’re planning to use this camera as a security device. While you get three hours of event-triggered recordings for free, that’s not going to do much good if there’s someone creeping around your property at 1 a.m. but you don’t see the alert until you wake up at 6 a.m.

A subscription adds 30 or 60 days of event-based recordings, 24/7 continuous recording, the excellent Familiar Faces feature, and sound alerts — although only for carbon monoxide and smoke alarms, which is less useful for an outdoor camera. I do miss the “dog barking” and “people talking” alerts that came on the older Nest IQ cams.

My colleague Dan Seifert reviewed the Google Nest Cam, and his thoughts apply here — this is a good camera with decent video quality. Still, it’s not as great as the Nest IQ cameras were, whose 4K sensors and longer digital zoom made it easier to hone in on details such as a name badge or license plate. The camera also can’t automatically zoom and pan as its predecessors could (and the Arlo can), a handy feature for an outdoor security camera as it can track someone further around your property.


Daytime footage is good enough to identify people but if you zoom in it gets pixelated quickly.

But when paired with the floodlights, the Google Nest Cam gets a clearer picture at night — the added lumens allowing for full-color night vision. While this doesn’t help with distance, it does provide more detail.

Google has also implemented the lighting control nicely, giving you as much control over the floodlights as you get with any other smart light. You can turn them on and off and dim or brighten them with voice control or in the Google Home app. You can also add them into a Routine, so they can come on when you leave and turn off when you arrive home.

These are security lights, though, so even on the dimmest setting, they’re still bright, and I wouldn’t plan on using them as outdoor accent lighting.


Nighttime footage is crisp and clear (up to 20 feet) and when the floodlights kick on (triggered by person detection in this clip) you get full color.

There’s also plenty of control for deciding what triggers the lights and when. You can choose one or more from motion, live viewing, and any camera event (such as people, animals, vehicles) to activate the lights at night, and there are four daylight sensing options to determine how dark it has to be before they come on. There’s also a setting for how long the lights stay on once activated, from 10 seconds up to five minutes. In the Home app you can also turn them on or off like regular lights, with no timeout.

There’s plenty of control for deciding what triggers the lights and when.

These options significantly cut down how often I lit up the side of my house where I placed the camera. I set it to turn on only when it saw a person and created an activity zone to cut out my neighbors’ pathway, which is adjacent to mine. Compared to the Ring Floodlight Camera installed on the other side of my house (which also has person detection), it turned on much less frequently.

I have two main issues with this camera: the Google Home app and the design. I’ll start with the app. The Home app does some things well — including lighting control, and it’s great that the floodlight is set up just like any other light in the app. But it’s not good for viewing or managing security cameras; specifically, the timeline view is clunky, and the route into viewing events is convoluted (although I do like the mini GIFs you get when you eventually land on the Full History page). The old Nest app is much better, but Google is moving away from it, and frustratingly, you can only use this Nest camera in the Google app.

Case in point, there are no controls for the floodlights in the camera portion of the app. You can choose what turns them on in the camera settings, but you can’t adjust brightness, turn them on or off, or dim them there. Instead, you have to navigate over to the main Google Home control page — about six taps away — to do any of this. This feels like an oversight and is a frustrating user experience.

As for design, Google over-thought this one. A floodlight camera is a simple concept: lights with a camera in the middle. Most of those on the market today look remarkably similar, but the Nest Cam with floodlight has a base that’s almost a foot long. This means if you’re installing on the side of your house on a wall, the camera extends outwards farther than others do — giving the motion sensor beneath it and the camera itself a better view. But if you install it under an eave — where all my existing floodlight wiring is (and I am not alone here) — you end up with a very long, ungainly looking device dangling off the side of your house.

Installing the floodlight was also tricky, mainly because of this awkward positioning. Attaching the wiring was similar to any floodlight device; you need to hardwire it to your houses’ electrical wiring using a standard outdoor junction box (and if you’re not comfortable with wiring, especially while on the top of a ladder, I would highly recommend paying for a professional to install it — Nest offers this for $179).

The problem came with getting the right angle for the camera. Because we had to install it essentially upside down, the very short wire that attaches the Google Nest Cam to the floodlights left little room for maneuverability. I couldn’t angle it high enough to capture the whole area I wanted to.

Thankfully, the lights themselves have a lot more flexibility, and you can rotate them fully back and forth, and easily position them to cast the light where you want it and not into your neighbors’ window.

Awkward design aside, the Google Nest Cam with floodlight performed very well in my testing. The lights respond accurately to the different motion events — only turning on for people, animals, or motion when those were selected.

The lights also responded instantly to general motion events as those use the motion sensor on the floodlight. The smart motion activations (for people and animal) depend on the camera seeing the person or animal first, so they took a second or two longer.

Alerts also came through on my iPhone 13 much faster than those on the Ring floodlight camera I’m also testing, likely due to the Nest’s on-device processing. However, Nest’s Familiar Faces feature still needs some work, telling me at one point it had spotted me outside, when it was actually the rather burly Comcast tech out there working with my connections.

If you are invested in the Google Home ecosystem, the Google Nest Cam with floodlight is your best option if you have the wiring in place. It’s a better choice than the battery Nest Cam and the Arlo Floodlight Pro 3, the only other floodlight camera that’s fully integrated with the Google Home app (where you can view footage in the app and on a Nest smart display). The Arlo has a similar price and can be installed without wires if that’s an issue, but the lighting isn’t as flexible.

None of the new Nest Cams, which include an indoor/outdoor battery cam, indoor wired cam and doorbell cam, work with any other smart ecosystem. So, if you are running an Amazon Alexa or Apple HomeKit smart home, you should look at Ring, Eufy, Arlo or Netatmo’s Smart Outdoor Camera. These all work with Alexa, and the Netatmo and Arlo also work with HomeKit.