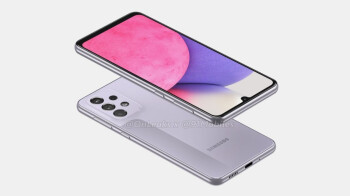 For pretty obvious reasons, the Galaxy S22 family and the oft-delayed S21 FE 5G have monopolized the spotlight over the last couple of months in terms of unreleased Samsung smartphones. But it’s equally as obvious that the company also plans to unveil a number of other Android handsets in early 2022, and one of the most… intriguing ones seems to have just leaked in two different colors.

In addition to factory CAD-based renders showing off the black and (purplish) white versions of the upcoming Galaxy A33 5G from every angle, Steve Hemmerstoffer (aka @OnLeaks) has once again joined forces with the folks at 91mobiles to reveal some of this mid-ranger’s key specs and features.

Both Steve and the publication’s reputation precedes them, which means that there’s an extremely high likelihood that everything we’re going to discuss about the Samsung Galaxy A33 5G will eventually pan out.

A familiar design with a notch… and something missing

Just because Samsung is expected to take a bit of a creative risk with the LG-inspired appearance of the S22 Ultra rear camera arrangement, that doesn’t mean the same thing is on the cards for the tech giant’s mid-end devices next year.
By 2021 (let alone 2022) standards, the Galaxy A33 5G arguably looks as bland as budget-friendly mid-rangers come, with a good old fashioned U-shaped notch, large chin, noticeable side bezels, flat screen, and a… not-so-bad rectangular rear shooter module housing a total of four imaging sensors and an LED flash.

Overall, this thing is slightly handsomer than its predecessor (which has to be worth something), and its ever so slightly smaller 6.4-inch display is squeezed into a considerably more compact body measuring 159.7mm in height (compared to 164.2mm for the Galaxy A32 5G), 74mm in width (versus 76.1), and 8.1mm in depth (versus 9.1).

Unfortunately, all the subtle design revisions may prove to be for naught, as many Android bargain hunters are likely to notice just one thing when looking at the 5G-enabled Galaxy A33. There’s no headphone jack at the top… or at the bottom, or anywhere else, which is a very bizarre and unusual omission for a non-flagship Samsung phone.

In case you’re wondering, yes, the Galaxy A32 5G, A32, A52, A52 5G, A72, and even the relatively recently unveiled A52s 5G all come with a trusty old 3.5mm audio jack in tow, although the same is actually not true for the even newer Galaxy M52 5G.
Could this be the beginning of the end for the headphone jack on Samsung’s most popular handsets? We don’t want to jump to conclusions, but as you might remember, the Galaxy A53 5G’s leaked renders looked similar to these from that particular standpoint.

While there are still plenty of unanswered questions, the rumored FHD+ resolution of the A33 5G’s 6.4-inch Super AMOLED screen is enough to make us expect a price hike of some sort over the HD+ Galaxy A32 5G.

That humbler 6.5-incher, mind you, normally goes for less than $300 in the US, and although we wouldn’t want to make any firm predictions until we hear about possible camera, battery, or processing power upgrades, we’re fairly certain the Galaxy A33 5G will be able to compete against the best budget 5G phones out there at under $400.

This is a potentially bigger deal than some of you might think, by the way, as Samsung reportedly plans to manufacture a whopping 23 million A33 5G units in 2022 to handle global demand. That’s more than the combined production goal of the Galaxy S22 and S22+, although the 4G LTE-only Galaxy A13 and the higher-end A53 5G are likely to prove even more successful.

If history is any indication, the Galaxy A33 5G will see daylight in January 2022, but surprise, surprise, there’s purportedly no 4G LTE-only variant in the pipeline this time around.

Almost everything else is up in the air at the moment, including what processor will be selected as the successor to MediaTek’s Dimensity 720 inside the Galaxy A32 5G. Qualcomm’s mid-range chips seem out of contention in the context of the ongoing shortages, but obviously, we’ll just have to wait and see.